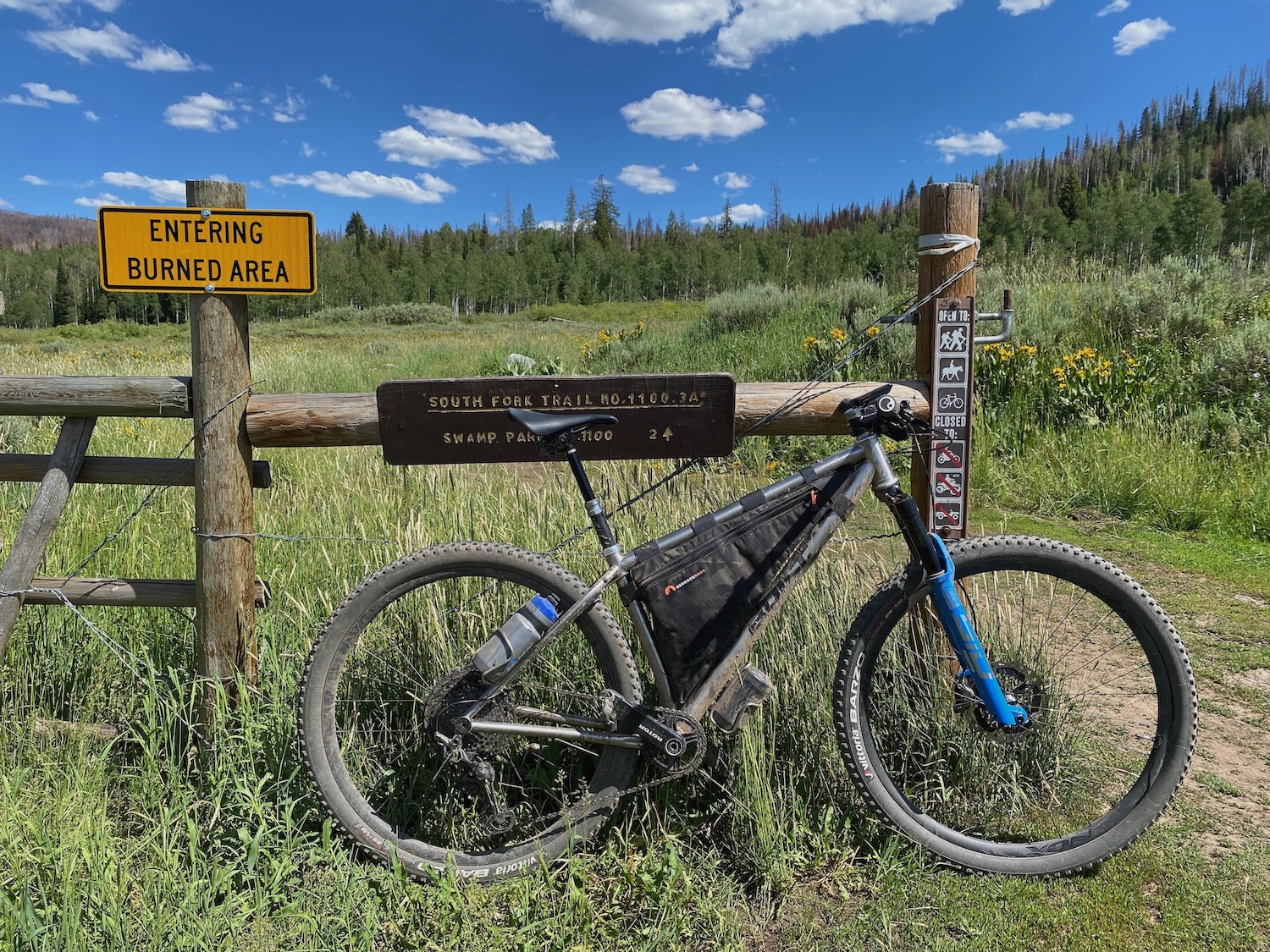 It’s been an OK summer of riding so far. I say only OK because compared to the last few years it hasn’t been as much. Granted we have a lot going on – moving into a new building soon – which I will post about in a couple weeks! And healing a couple injuries lingering from last winter. ‘A lot going on’ seems like something a busy mom of 3, or a college grad student would say, not self-employed – childless – thirty & forty something year olds, but this is where we are right now. I have a couple epic adventures, a mountain bike race, and some other unique rides planned for later this summer/fall after the move. I’m looking forward to those and sharing about them later. For now riding goals are low priority and getting this move underway is top priority.

We are incredibly spoiled here with the quality and quantity of roads and trails to ride in Steamboat. It’s no surprise most people choose the trails in town or closest to town to ride most days. I’ve done a fair share of riding North of town but i’ve been wanting to explore more up there and in particular the ones off of Seedhouse Road, a 30-40 minute drive from town. The trails up there are mostly Forest Service maintained trails – which are very different from the trails in town. The terrain is much more varied and less ‘groomed’ as my MTB friends say. 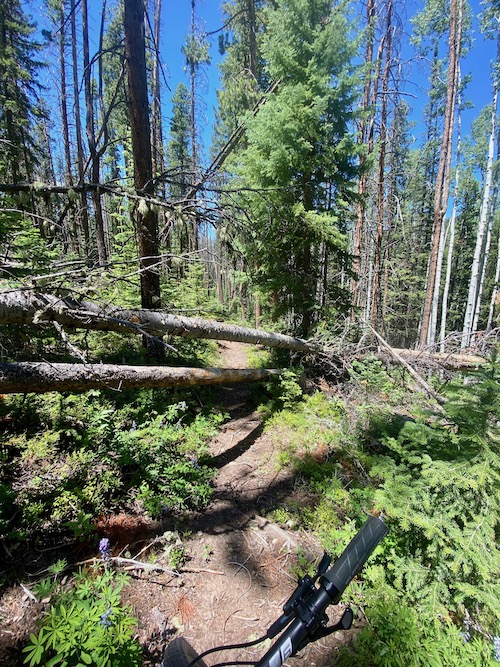 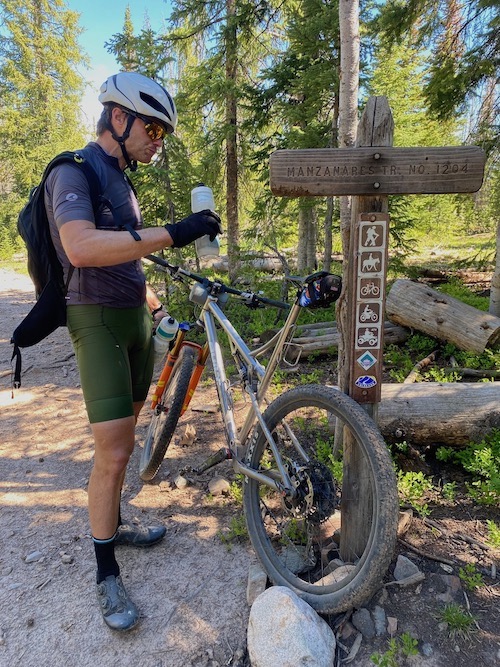 When I think of Forest service trails I think of the faded wooden signs, sometimes maintained sometimes not, sometimes downed trees, stream crossings, hike-a-bikes, ruts from dirt bikes and ATVs, sometimes double track, there aren’t maps at every intersection so you need to carry a paper map, usually there is no cell service. I call this style of riding Adventure Riding but Brad says this is how normal Mountain Biking used to be. I’m sure we could have a discussion about how normal Mountain Biking evolved into Adventure Riding, and i’d love to have that conversation with veterans of the sport since I didn’t start Mountain Biking until 2012ish. Whatever you want to call it I know I prefer Adventure Riding over smooth Flow Trails any day, as long as i’m prepared. Being prepared is important since there is no cell service on any of these trails – which is another point about how Mountain Biking used to be different, before cell phones or even the huge range of Cell service we have now, but I digress.

I admit sometimes I can be a curmudgeon about how busy the trails in town get on weekends and weeknights, but I realize the relatively easier, close-to-town trails make it more accessible for all kinds of people and kids especially to get out Mountain Biking. The last thing we need are rude localist attitudes out on the trail. On that note there is a local guy around here who has a reputation for unprovokedly riding up to people and heckling them about how lame they are for riding a gravel bike or about how they must be from out of town (an assumption based on outfit, bike, look, I take it). That was the gist of the two interactions I had with him at least. I doubt i’m the only one. Less of that attitude and more welcoming, nice vibes please! If you run into him out there tell him I said hi 👋. 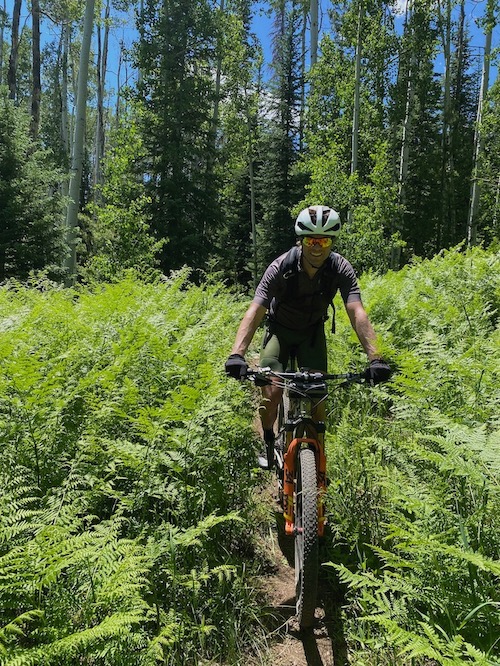 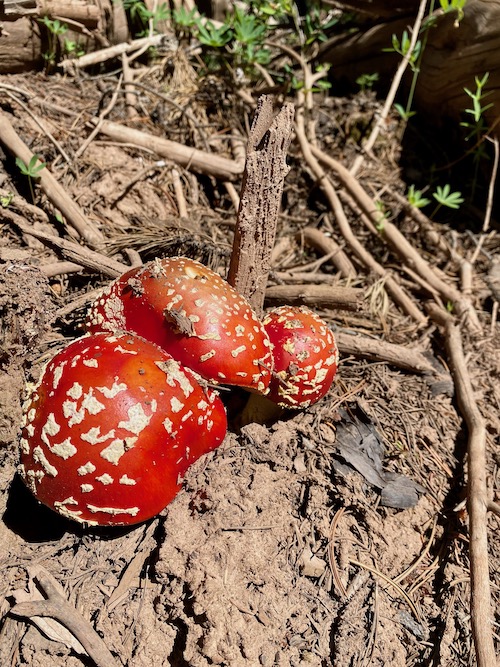 Poisonous Mushrooms along the trail ☠️ 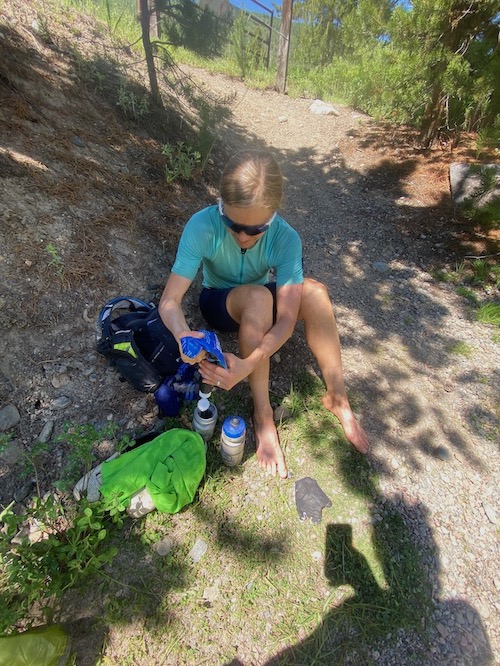 Filtering water along the South Fork

I’ll call our ride the North Routt 50 Mile Adventure Mixed Terrain Route – not mixed terrain as in some of the Gravel Routes we hear and post about, but mixed terrain as in a Mountain Bike is required but you will ride it on a few miles of pavement in order to make a sweet loop. There are many other variations of 50 mile + adventure routes you can put together in North Routt County. If you go you’ll need a paper map not only because Strava for some odd reason doesn’t let you build a route on most of these trails, but a paper map is always a good thing to have in an unfamiliar place. Also note you can’t ride a bike in Wilderness areas so it’s important to pay attention to which trails allow bikes and which don’t 👍

In a nutshell here’s a vague written description of the route, not that this would help anyone who wants to replicate the route, but gives an idea of how many trails and ATV roads there are up there to potentially link together for epic rides:
Parked at Southfork trailhead – we were literally the only vehicle there when we started AND ended! Rode up Seedhouse road a few miles to Diamond Park Trail, did that up and connected to 409 road, onto Manzanares trail, popped out on road 409 (the furthest north section) and rode across some field to get to Elkhorn trail, to road 550 and then a left turn on the double track up to Hahns peak, descended that, Highway 129 over to Pearl Lake, Pearl Lake trail up to another forest service road I don’t know the number of, up that a little ways and then the cutover trail over to Hinman trail, descended that to Seedhouse Road again, up Seedhouse for 3 miles and then Southfork trail (best this direction) and ended at the truck. Sounds so straight forward. JK. It’s definitely not straight forward. Here is my Strava activity for a better visual if anyone is interested in replicating or taking a look.

It wouldn’t be a North Routt Adventure ride without all the things I mentioned in the third paragraph – hike-a-bikes, ruts from dirt bikes, stream crossings, downed trees, map reading, etc. It took us about 7 hours total with stops, 6 hours moving time. We stopped a few times for snacks, to filter water, and once at the historic Columbine store to buy a much needed cold drink. For the most part we didn’t see many people on the trail – a few hikers close to Pearl Lake and some dirt bikers. Other than that we only saw one other mountain biker and he was a Forest Service employee probably coming back from doing trail maintenance. Pearl Lake was the busiest part of the ride. We rode past a group doing Paddle Board Yoga on the lake. Kudos to all the Paddle Board Yogi’s – I could probably manage Shavanasa pose on a paddle board but that would be the extent of it. 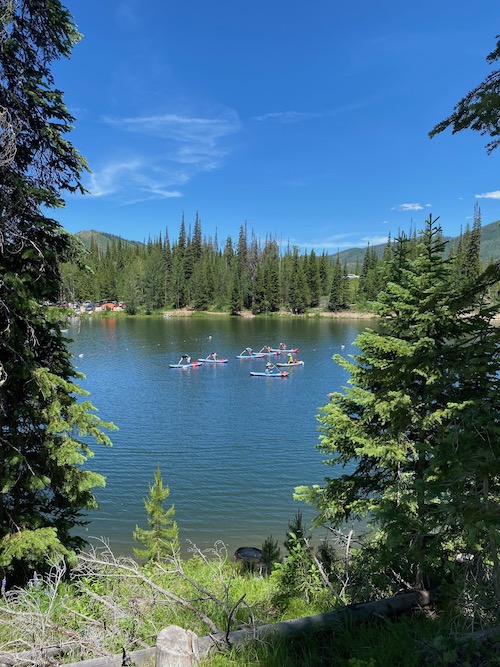 Riding past Paddle Board Yoga at Pearl Lake – Most people we saw on this route were at popular Pearl Lake. 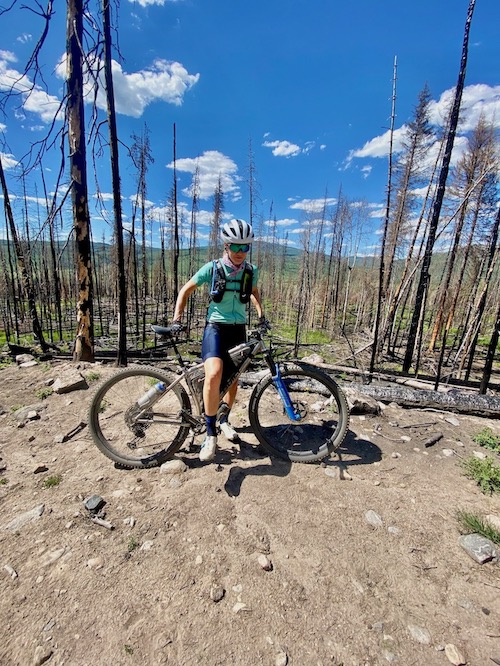 South Fork Trail is still there but surrounding conifers were burned from the fire last year and the soil changed into a finer dust compared to the more firm sticky dirt it used to be. 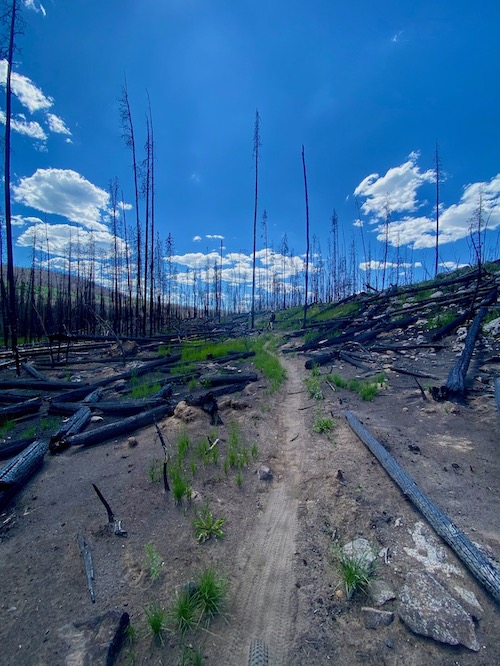 South Fork used to be a mostly shaded trail.

The ride itself was by far the best MTB ride all year! I was tired from life and I felt out of shape but I didn’t care about setting PRs or going hard, I just needed a long challenging but not crushing day out on the trails. Brad can do any ride, any distance – in shape or out of shape, tired or not tired, it’s pretty much irrelevant and he always has a good ride. I envy him for this 😂.  I’m more of a 50/50 feel good/bad kind of rider, but regardless of feeling a little tired it was a really great day and I’m planning more adventure rides in this neck of the woods soon with the goal of really get to know the trails and Forest Service/ATV roads up there.

I also love it when we go out and don’t have to anticipate rain or thunder storms, which is a big part of life in Colorado. There was 0% chance of rain and although it was a scorcher (Wahoo read an average temp of 88º) there were plenty of places to stop and cool off including a creek crossing near the end of the ride on South Fork Trail, a nice refresher. It was a challenging day but definitely doable, i’ve had far more challenging days in North Routt. Maybe now I know what to expect up there so it doesn’t seem so difficult. Also, I think having my bearings dialed from a directional standpoint is a confidence boost versus if it were my first ride up there and having anxiety about getting lost or making a wrong turn. Ultimately I think these things contributed to a positive, energetic state of mind and set the tone for a super enjoyable ride.