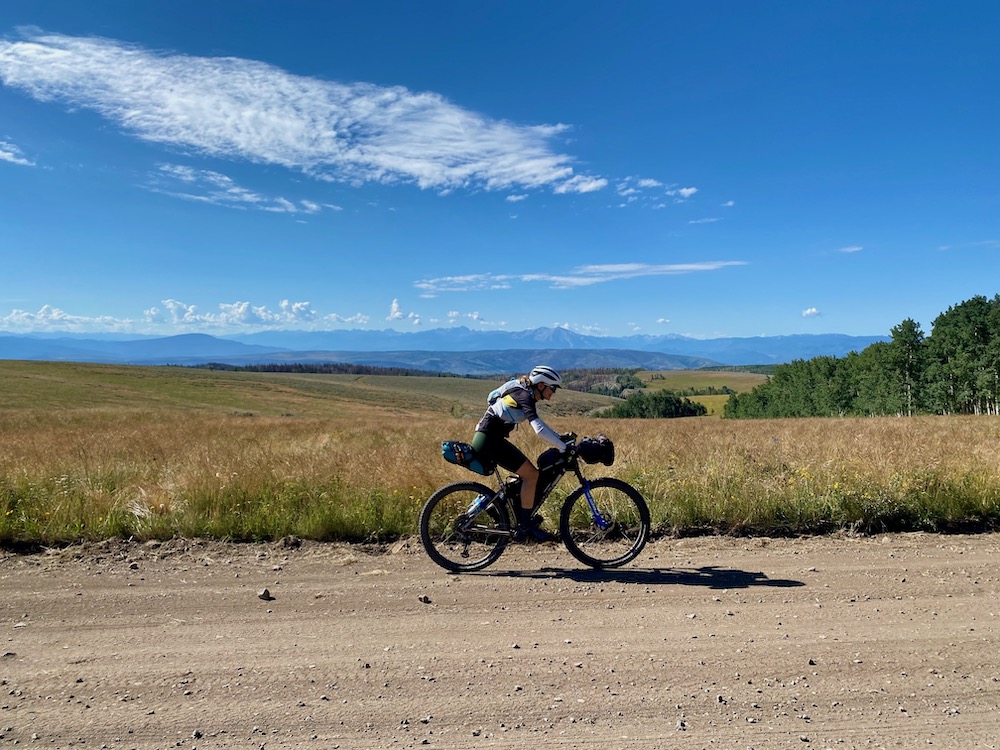 A couple months ago Brad and I rode around the Flattops Wilderness area, a 3 day, 2 night bikepack trip. I’ve been wanting to ride this route for quite some time and stoked to finally make it happen. It just so happened that Brad tore his UCL (a very important ligament in the thumb) during a town Mountain Bike race the Wednesday evening prior to the Friday we were supposed to leave. You may already know about the thumb injury from his posts on Instagram. This injury requires surgery pretty much as soon as possible so we scheduled surgery for the following week. I assumed he would not be able to go on the trip but Brad being the optimist he is, asked the PA at the doctors office if it would be ok to go Bikepacking. She said it would be fine to go on the trip since he was getting surgery soon and there isn’t much that could damage it further. I figured i’d be riding this route alone after Brad’s injury, but i’m glad he was able to go as I would soon find out it’s not really the kind of route i’d want to ride solo.

I chose to ride my hardtail mountain bike and not a gravel bike, because of one rough section on the southern end of the Flattops. I also wanted to get more miles on this bike to dial it in more for future single track bikepacking. Brad rode his drop bar touring bike since it would be impossible for him to shift with the thumb injury on his Mountain bike. The route is mostly smooth dirt roads and pavement, but you’d be uncomfortable and probably sad on a gravel bike for a long slow 25 mile stretch. It took us nearly 5 hours to complete that section.

Day 1 was a gorgeous 80 mile ride with about 6k of climbing, heading south of Steamboat towards Colorado River road. We took the dirt soon after passing through the tiny town of Yampa and through some beautiful terrain skirting along the northern side of the Flattops to Colorado River Road. I didn’t expect the drastic change in temperature on the descent. It felt like descending into a convection oven as we rode along the river. Thankfully we were heading downstream and not uphill, as my computer was reading 107º. I’m sure that wasn’t entirely accurate, my guess is that it was in the high 90’s and approaching triple digits as we descended closer to the turn off. Luckily there are a couple spots you can stop and dip in the River, which we took advantage of. A few miles before I70 the route takes a sharp right turn up Coffee Pot Road. The climb meant an immediate drop in temperature with trees for shade and an ice cold creek running alongside it, which we also took full advantage of. We planned to camp along the creek, and luckily found a camp spot. I didn’t realize it was such a popular camping area. There were not many sites, and there wasn’t another good option until at least 13 or so more miles of climbing up the exposed part of Coffee Pot Road. We sat in the ice cold creek for at least 20 minutes to cool off, set up camp, and had a lovely freeze dried meal for dinner. On that note, this is my favorite brand of freeze dried food for bikepacking. I don’t have any affiliation with the company, I just think they’re great. If you’re looking for healthier bikepacking/camping food that is lower in sodium than most brands and doesn’t have the weird sh$t in it, this is the brand. 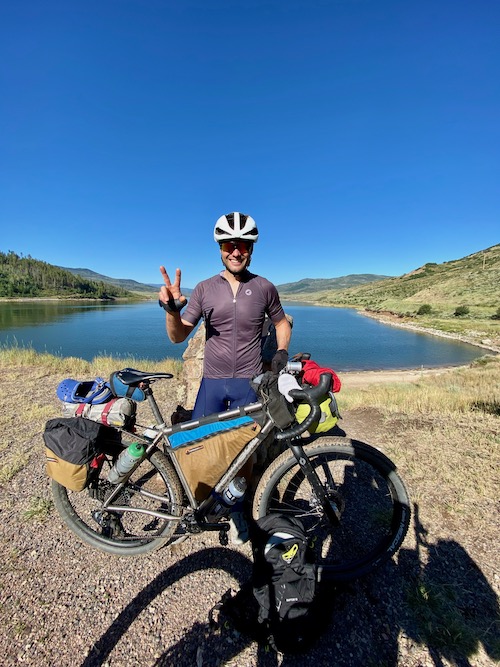 Brad with his thumb brace on ready to ride 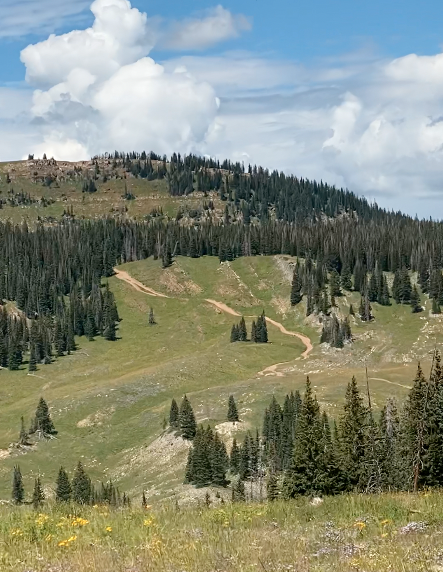 Somewhere in the Flattops 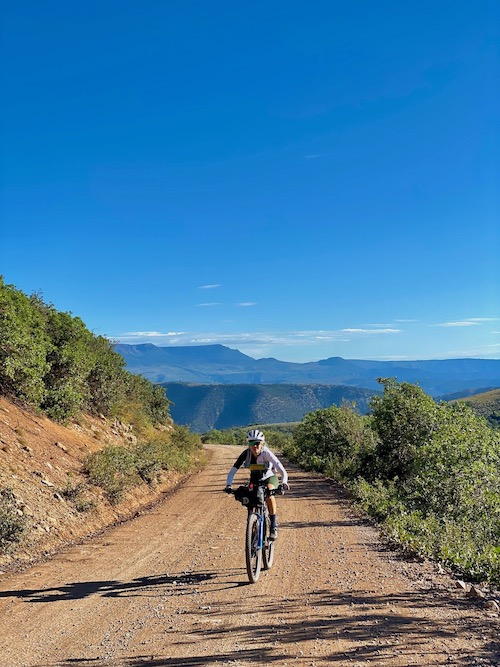 On Day 2 we woke up to see Brad’s bike tipped over and after further inspection realized we had a visitor during the night. Maybe more accurately we were visitors in another creature’s territory. Unfortunately, they chewed through Brad’s pannier that had all our food in it. We were not in bear territory so we opted to not hang our food that night, which was a mistake and honestly an embarrassing one because we both know better than to leave food in a pannier at a popular camping area regardless of whether or not it is bear territory. Rodents and deer and other creatures are known to chew through bikepacking bags, and i’ve heard plenty of bikepackers talk about it so I can only blame ourselves for deciding to not hang our food. There are no resupply options on this route so I took an inventory of our salvageable food and luckily it was enough to get by, but we wouldn’t have any reserves in case we had to spend an extra night out.

We started riding by 7am and headed up the 14 mile Coffee Pot Road climb and into to the Flattops. The terrain rolls for another 10 miles or so after the top and then the fun begins. The next 25 miles were extremely rough and slow going with a few hike-a-bike sections (down and up). We came across a broken down jeep in a creek bed after a downhill hike-a -bike. It looked abandoned but when we got closer a man appeared from behind the jeep. He warned us about the sheep in the area and to make sure we filter our water because there were thousands of them pooping everywhere. Then he told us he’d be stuck there for 4 days. 4 DAYS!? He was in good spirits and looked like he was prepared with cooking supplies and camp set up behind his jeep so there wasn’t much we could do to help, and neither of us know anything about Jeep mechanics. He said some people knew where he was so we carried on up another hike-a-bike and towards the Crux of the route, Blair Mountain. As we hiked up Blair Mountain, I could see dark clouds moving in. I knew from reading about the route, we should plan to have a good weather window when ascending Blair Mountain since it traverses for a while and it’s exposed. Unfortunately it’s hard to plan to have a good weather window especially when it takes a solid 3-4 hours to reach that point from the good camp spots. The afternoon thunderstorms in Flattops seems like an everyday occurrence, I imagine this would be hard to avoid no matter what time or where you camped the night prior since it takes quite some time to get through this part of the route. We didn’t take our time traversing with the dark clouds moving closer, but I wish we could’ve since it’s so beautiful up there. I heard the first crash of thunder within a mile of the descent so I booked it to get closer to some tree cover. I looked back and Brad was no where in sight. I remembered of course he can’t descend as fast as me because of his thumb injury, he can’t grip the handlebars tightly, oops. I waited a few minutes, put on my rain pants and then we descended together in the rain and thunder. The double track road was muddy and water was flowing down the ruts. It was no use to try to keep the bikes clean so we just kept pedaling accumulating grit and mud in the drivetrains. It wasn’t too sticky of mud, more like the gritty kind. Not like the peanut butter mud you find in southern Colorado or New Mexico. It finally stopped raining when we reached The New Castle-Buford road. I was hesitant to take my rain gear off because i’m convinced that whenever I take the time to take my rain gear off it inevitably starts raining again. I wore it for a few miles until it felt like a sauna under my clothes and then of course the threat of more rain was gone. After filtering water in the Northfork river, and randomly finding a few beers chilling in the river (they looked like they’d been there for days!) we made our way to Northfork Campground after 80 miles, 8k of climbing and nearly 12 hours later with a couple beers in Brad’s backpack.

Traversing the high point of the Flattops 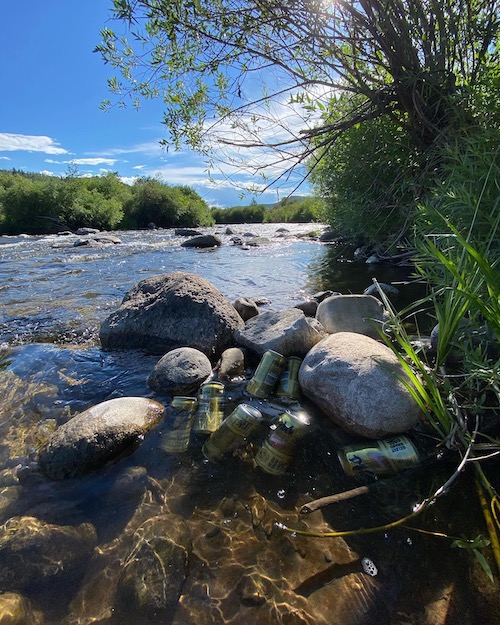 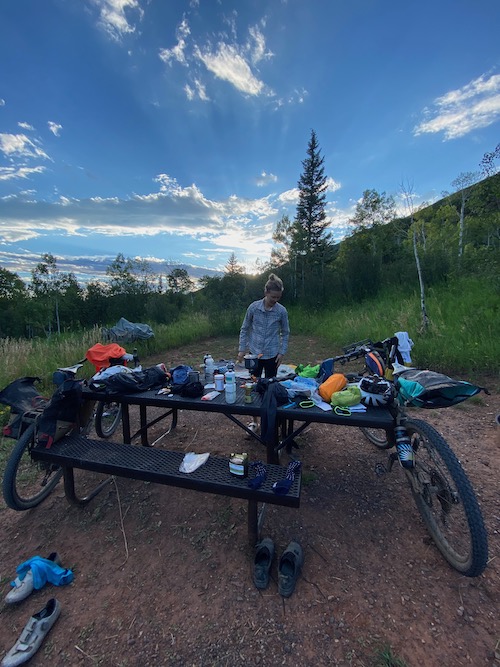 The inevitable gear explosion while setting up camp at Northfork CG

Day 3 was a familiar 70 miles and 5k of climbing. Most of the climbing accumulated over two dirt road passes, Dunckley, and Ripple Creek. The gravel was in better shape than I remember which made for a quicker than expected ride to Oak Creek where we stopped for a burrito at Lupitas. It started dumping torrential rain after lunch but it’s only 25 miles or so to home from there and I wanted to test out my gear in heavy rain so we put on our rain gear and headed out. My new Gore waterproof pants, Black Diamond jacket, and Pearl Izumi gloves did the trick just fine but my seatbag on the other hand, I was bummed about. I don’t like giving negative reviews for various reasons and for the fact that I really like my other items from this brand and haven’t had an issue with water leakage in the panniers or frame bags – granted I haven’t ridden through a rain storm of the same capacity as this one. When I got home everything in the Seatbag was entirely soaked. I’m probably not going to buy another seatbag anytime soon, so the next time I use this bag I will most likely pack my items in a dry bag in the seatbag.

This was a good challenging 3 day trip, and i’m glad Brad was able to do this ride with an injured thumb. I probably wouldn’t recommend doing this route solo unless you’re highly confident fixing mechanicals. It’s only the rough 25 mile stretch on the south side of the flattops that has a high(ish) potential for mechanicals if you don’t ride somewhat conservatively. Also a fairly high potential for flatting through this section especially on a gravel bike or anything under 2″ tires. You’d have a very long and slow walk out if you couldn’t fix your bike.

Feel free to reach out with questions about this route or the gear we used.